New DaVinci Resolve 16.2 is a major update with new Fairlight audio features
to allow low-cost audio post-production with a simple mouse and keyboard.

DaVinci Resolve 16.2 is available for download now from the Blackmagic Design web site.

This new update has major new updates for editing in the Fairlight audio timeline when using a mouse and keyboard. This is because the new edit selection mode unlocks functionality previously only available via the audio editor on the full Fairlight console, so editing is much faster than before. In addition, the edit selection mode makes adding fades, cuts and even moving clips only a mouse click away. New scalable waveforms let users zoom in without adjusting the volume. Bouncing lets customers render a clip with custom sound effects directly from the Fairlight timeline.

Adding multiple clips is easier as they can now be added vertically to the timeline, not just horizontally, making it easier to add multiple tracks of audio at once. Multichannel tracks can now be converted into linked groups directly in the timeline so users no longer have to change clips manually and reimport. There's added support for frame boundary editing which improves file export compatibility for film and broadcast deliveries. Frame boundary editing now adds precision so users can easily trim to frame boundaries without having to zoom all the way in the timeline. Modifier keys are now supported so clips can be duplicated directly in the timeline using the keyboard and mouse. Users can also copy clips across multiple timelines with ease.

DaVinci Resolve 16.2 also includes support for the Blackmagic Fairlight Sound Library with new support for metadata-based searches, so customers don’t need to know the filename to find a sound effect. Search results also display both the filename and description so finding the perfect sound effect is faster and easier than before.

Finding audio effects is also faster with automatic sorting that will separate them first by category, and then by native or third party plugins. Effects can also be marked as a favorite so they move to the top of the list, making navigation easier than ever. 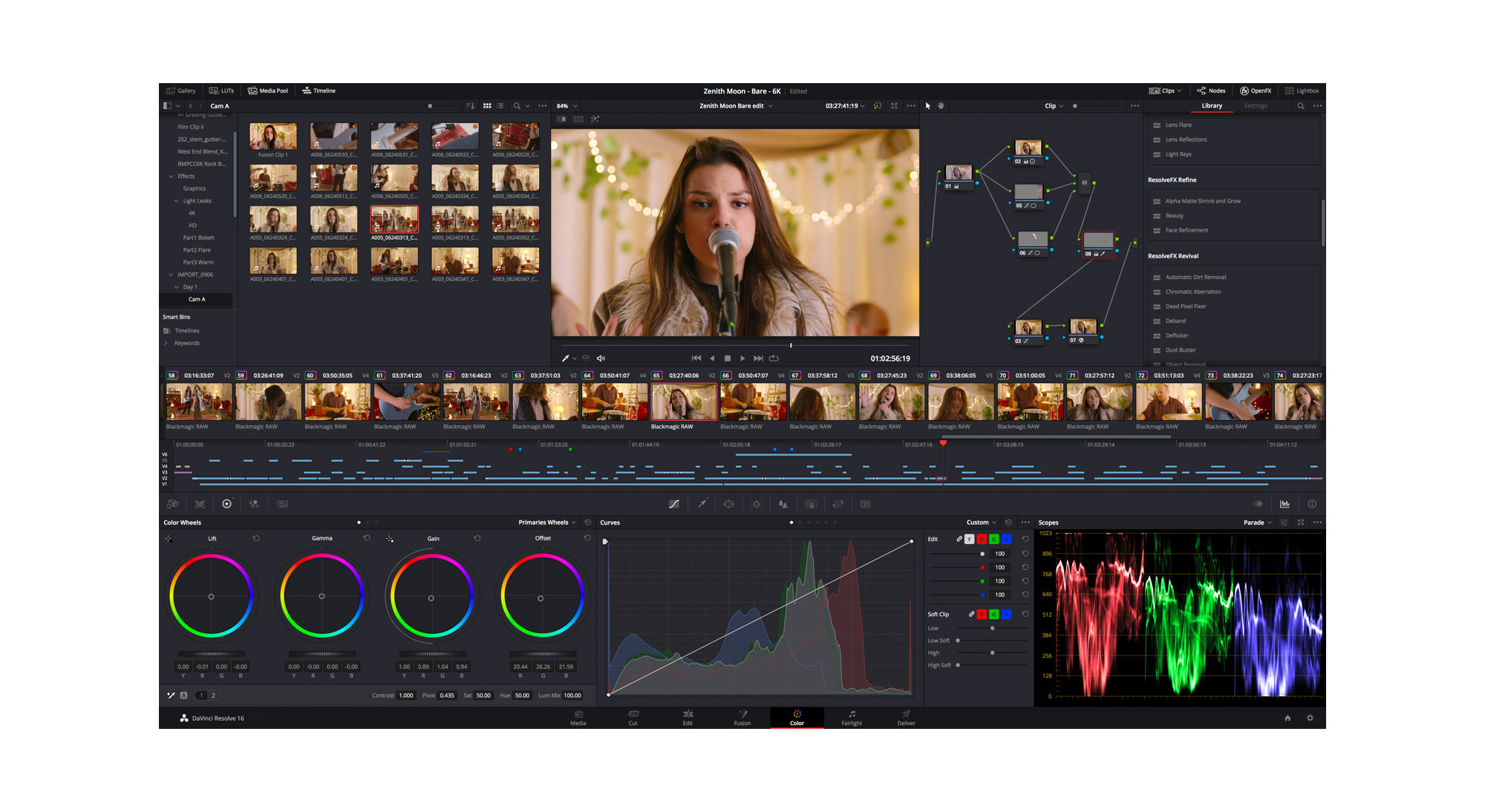 The extensive Fairlight audio editing also has index improvements. The edit index is now available in the Fairlight page and works as it does in the other pages, displaying a list of all media used, simply click on a clip to navigate directly to its location in the timeline. The track index now supports drag selections for mute, solo, record enable and lock as well as visibility controls so customers can quickly swipe through a stack of tracks without having to click on each one individually. Audio tracks can also be rearranged by click and dragging a single track or a group of tracks in the track index.

This new release also includes improvements in AAF import and export. AAF support has been refined so AAF sequences can be imported directly to the timeline in use. Additionally, if the project features a different time scale the AAF data can also be imported with an offset value to match. AAF files that contain multi-channels will also be recognized as linked groups automatically. The AAF export has also been updated and now supports industry-standard broadcast wave files. Audio crossfades and fade handles are now added to the AAF files exported from Fairlight and will be recognized in other applications.

For traditional Fairlight uses, this new update makes major improvements in importing old legacy Fairlight projects. This includes improved speed when opening projects with over 1000 media files, this means projects are imported faster than before.

This new software also improves audio mixing. A new EQ curve preset for clip EQ in the inspector allows removal of troublesome frequencies. New FairlightFX filters include a new meter plug-in that adds a floating meter for any track or bus to keep an eye on levels even if the monitoring panel or mixer are closed. There’s also a new LFE filter designed to smoothly roll off the higher frequencies when mixing low-frequency effects in surround.

Working with immersive sound workflows using the Fairlight audio editor has been updated and now includes dedicated controls for panning up and down. Additionally, clip EQ can now be altered in the inspector on the editor panel. Copy and paste functions have been updated and now all attributes are copied, including EQ, automation and clip gain. Sound engineers can set up their preferred workflow including creating and applying their own presets for clip EQ. Plugin parameters can also be customized or added so users have fast access to their preferred toolset.

Clip levels can now be changed relatively, this allows users to adjust the overall gain while respecting existing adjustments. Clip levels can also be reset to unity, easily removing any level adjustments that may have previously been made. Fades can also be deleted directly from the Fairlight Editor, making it faster to do than before. Sound engineers can also now save their preferred track view so they get the view they want without having to create it each time. More functions previously only available via the keyboard are now accessible using the panel, including layered editing. This also means that automation curves can also now be selected via the keyboard or audio panel.

Continuing on with the extensive improvements to the Fairlight audio, there have also been major updates to the audio editor transport control. Track navigation is now improved and even works when nothing is selected. Users can navigate directly to the timecode entry window above the timeline from the audio editor panel, and there is added support for high frame rate timecodes. Timecode entry now supports values relative to the current CTI location, so the playhead can move along the timeline relative to the position rather than a set timecode.

Support has also been added so the colon key can be used in place of the user typing 00. Master spill on console faders now lets users spill out all the tracks to a bus fader for quick adjustments in the mix. There’s also more precision with rotary controls on the panel and when using a mouse with the use of a modifier key. Users can also change the layout and select either icon or text-only labels on the Fairlight editor. For legacy Fairlight users, they can now use the traditional Fairlight layout they may be more familiar with. Moving around the timeline is even quicker with added support media left and media right selection keys to jump the playhead forwards and back.

This update also improves editing in DaVinci Resolve. Loading and switching timelines on the edit page is now faster with improved performance when working with a large number of audio tracks. Compound clips can now be made from in and out points so editors can be more selective with what media they want directly in the edit page. There is also support for previewing timeline audio when performing live overwrites of video only edits. Now when trimming, the duration will reflect the clip duration as customers actively trim so customers can set a specific clip length. Support for a change transition duration dialog.

The media pool now includes metadata support for audio files with up to 24 embedded channels. Users can also duplicate clips and timelines into the same bin using copy and paste commands.

Customers using collaborative workflows in the color page now have greater stability for their workflows. Support for running the primary DaVinci Resolve screen as a window when dual screen mode is enabled

Smart filters now let users sort media based on metadata fields, including keywords and people tag so users can find the clips they need faster.

"We are excited about this update as it has more new features for audio post-production," said Grant Petty, Blackmagic Design CEO. "These new features allow complex audio post-production work in the Fairlight page using a simple mouse and keyboard. That allows many more people to add professional audio quality to their work because DaVinci Resolve is a free download. That’s very exciting. 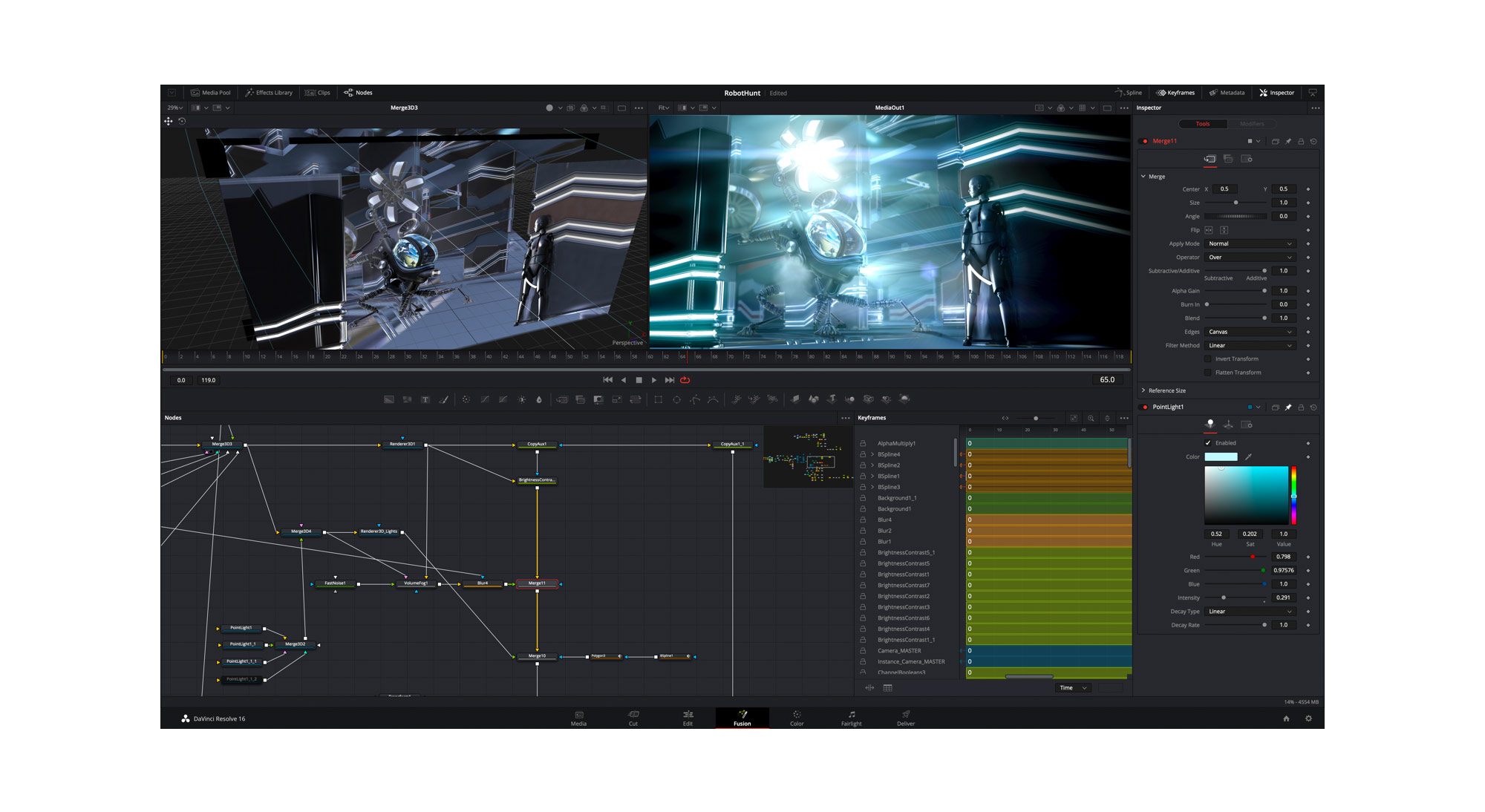 DaVinci Resolve 16.2 is available now for download from the Blackmagic Design web site.