6 Weeks with Daz Studio is a weekly account of my personal adventures with this interesting and powerful 3D program. I’ll share my observations, projects and ideas about the program along with any tutorials, websites and artists I come across. Be sure to visit Renderosity’s Daz Studio Pro forum and, of course, the Daz 3D website where you can download the program free of charge for Mac and PC.

Jumping Right In
Last week (week one) I went over the history of Daz Studio and how to download and install the program (it’s free, by the way). I decided to just jump right in and create a scene, pose a character, add a single ligjt and render using NVIDIA’s Iray. Here is the result:

Same thing goes for clothing, hair and a specific pre-built pose. Choose the tab that links to the department, then grab the items you want and double-click them. The items will immediately apply to the scene. So, if you choose a short hair style for your figure, the hair will be immediately applied to the model. 99% of the time the hair or clothing with fit perfectly with the figure you are working with but sometimes you might have to make adjustments to get it to fit right. Go to the Inspector side of Daz Studio (top right), highlight the item (hair, clothing) then right click. You then select “fit to item” and it’s done. Sometimes if you have a lot of items in the scene, you may be taken to another menu where you’ll have to choose the item you want it to fit to. It’s all pretty easy to figure out.

Daz Studio Interface
As I mentioned above, Daz Studio is very beginner friendly and well-designed. The program is set up so that you access various departments for creating a scenet. Content, lighting, cameras, rendering, etc.: all of these departmentments are also easy to manuever around.

I discovered that Daz Studio has several pre-built Layouts and Interface Styles to choose from. Default settings are fine for most users, but it’s good to know that you can customize the entire interface to make it show/work the way you want it to. You can find out the names of the styles/interfaces here.

There’s a good intro series of tutorials on the interface and basci workflow at the Daz3SD website. There are dozens of good tutorials on YouTube as well. Renderosity has a nice collection of intro tutorials which I’m using for this series.

Finding and Installing Content
Although Daz3D provides an excellent collection of default content for Daz Studio including the Genesis 8 male and female figures, you will very quickly want to get new content. I discovered this early on when I couldn’t find the right pose in the default poses for my first scene.

Since Daz Studio is extremely popular, you can find free and paid content at many sites. Daz3D has a marketplace which works perfectly with their install manager. Renderosity is my own choice for content as it’s generally cheaper and there is a wider variety of choices. But you do face a problem when you download free or purchased content outside of Daz3D: the Install Manager won’t install anything other than offical Daz3D-purchased content. That means you’ll have to install this kind of content manually.

Despite a large amount of internet posts on “Installing Daz Studio Content Manually” I still found I was unable to install some items that I purchased from Renderosity. Rather, I could see them inside of Daz Studio, but I’d get an error message when I tried to use them. Eventually after a few frustrating days, I came across a post by Jenn at Renderosity.com simultaneously with a tutorial on YouTube that solved the problem. Here is a link to Jenn’s post and I’ve provided an embed for the tutorial below

As you can see from the video the problem comes down to making sure you install your content into the right Daz Studio Library. Once I followed this tutorial, all of the purchased content (in zipped files) installed perfectly.

First Project: "Creating a Realistic Portrait"
I decided to follow a skillshare.com tutorial “Create a Realistic Portrait in Daz Studio”. It is by Manu de Mey who is one of the best video instructors I’ve ever encountered. He speaks slowly and to the point. The tutorial is only 8 lessons long and takes about 30 minutes to complete. 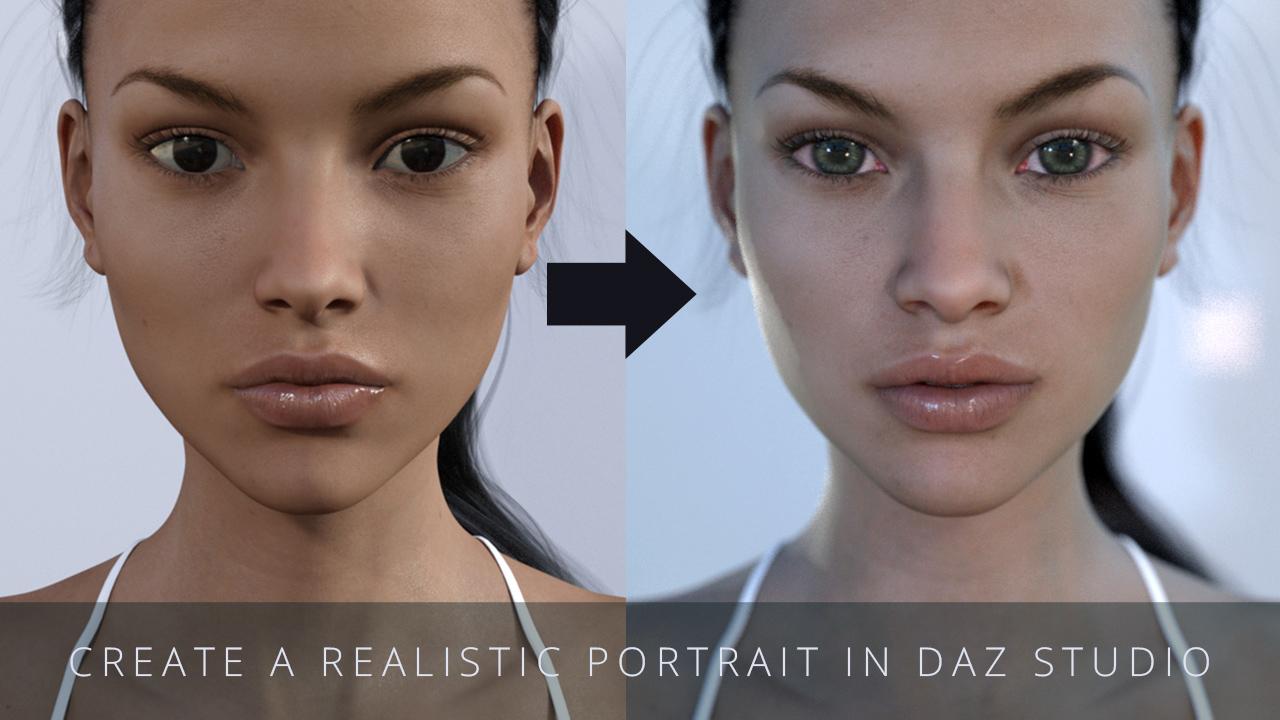 Instead of the default Genesis 8 female figure, I purchased Chloe Gen8F from Anagord at Renderosity.com. Basically what this is a morph of the main G8 female into a different looking woman. Daz Studio has all kinds of amazing tools to modify G8 figures on practically every level. What I am buying is someone elses work so that I don’t have to do it. Anagord is a top vendor at Renderosity and always has great products and packaging.

Following the first part of Manu’s tutorial, I created a scene, added the Chloe Gen8F morph to the default Gen8 model. Then added hair, make up and clothing. I then created a new camera which I used for this first render. Note that I’m still using the default light set up.

Next week I'll finish the tutorial and then focus on learning lighting from Renderosity vendor/artist's Sveva who created an outstanding tutorial for lighting in Daz Studio.

See you next week!

Next: Finishing First Project and Learning Lighting in Daz Studio Gallery: Elf on Battle by Pepsel