Manufacturers from private jets to the latest sneakers constantly seek innovative ways of communicating brand values to their target customers base - which has led many to incorporate VR into their experience design process.

Common sense dictates that the more engaging an experience is, the more likely someone will be affected by it.

VR, or full immersion, is one of the most powerful tools for engagement available, especially when wielded by an expert.

When INFINITI sought a compelling way to showcase the QX50 Concept model, they connected with such an expert - REWIND.

In building a unique VR experience for INFINITI across all of its automotive shows globally, REWIND laser-focused its design on delivering maximum impact, while making use of VR to elevate the brand in new ways.

Based in the UK, REWIND is a leading production studio that focuses on creating a broad range of immersive content.

In creating the Soul of the Machine showcase for INFINITI, the studio designed a unique guided narrative and interactive VR experience.

Taking a physical single seat from the QX50, the team set it up it in a stark white environment. The user then sits in the seat and when they place the VR headset on, the car builds itself around them in full immersive 3D.

At the end of the experience, users are asked to stand, and all of the cars individual parts blow away and twinkle around as if in a starfield. It’s captivating to say the least. 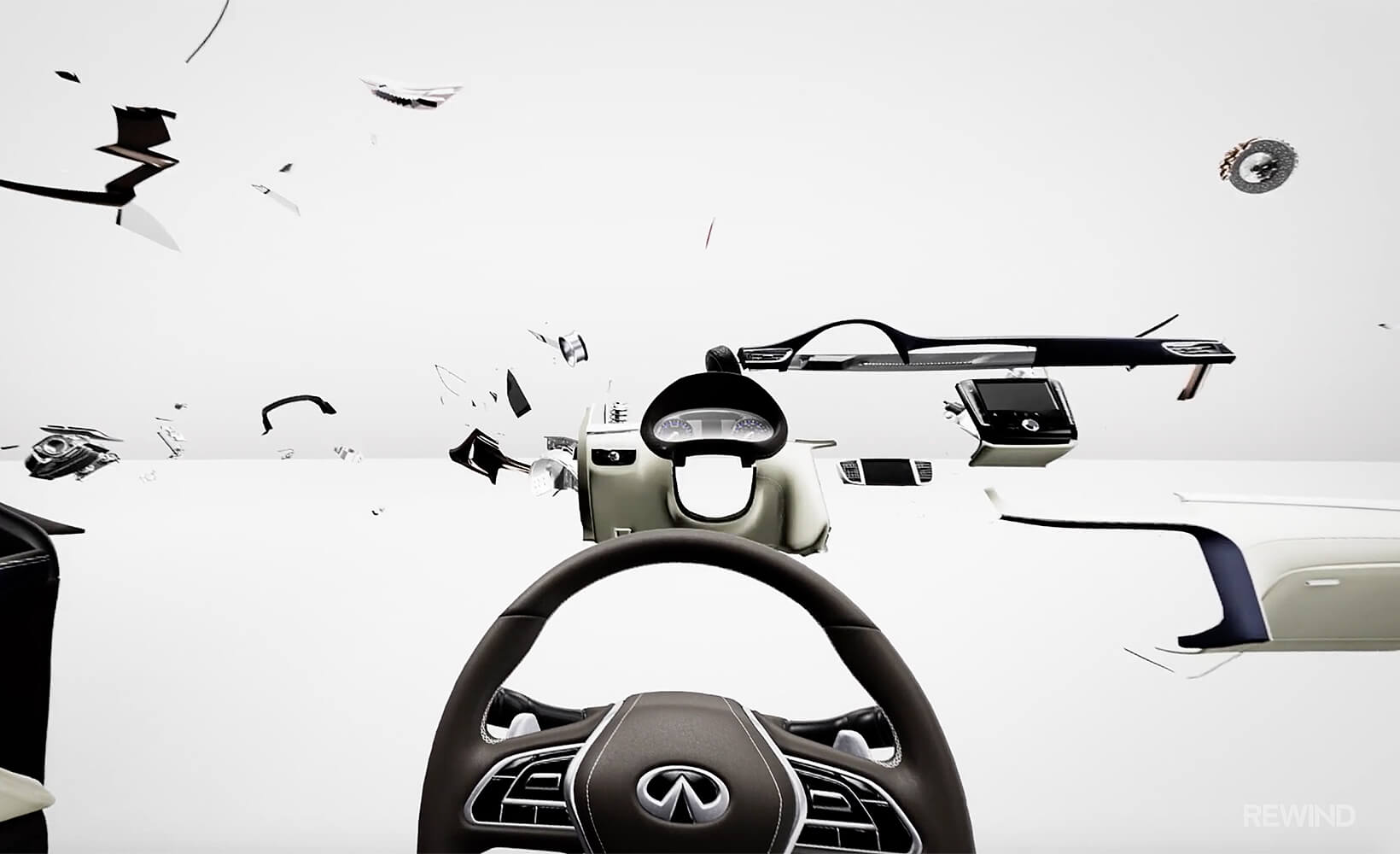 The photorealistic INFINITI model builds itself around the user in VR, putting them behind the wheel in a truly memorable way.

“Unreal Engine allowed us to take that huge CAD model, get it into engine and make it run in real-time,” says Solomon. “The challenge for the INFINITI project was that not only could you see the outside of the car, but you could see every nut and bolt it was made from, so we had to find a way of getting the exact model including nuts, bolts, and screws into the game engine and running in real-time with it.”

With past projects, the process for bringing CAD data into a real-time environment was entirely manual, which proved extremely time-consuming. Ever-evolving tools have made a huge difference in cutting down the time and energy needed to tackle that aspect of the design process.

“What we've seen very recently is the release of Unreal Studio and Datasmith, which is a singular tool to take CAD directly from the original CAD package it was created in and push it through to Unreal,” says Solomon. “So what used to take my guys three or four weeks to take a CAD model and get it ready for real-time, now takes a few hours with Datasmith.

This speed and efficiency has had a tremendous impact on real-time workflows on key projects, like INFINITI. Using Datasmith had made importing CAD data into Unreal Engine a trivial concern, adds Sam Birley, lead developer at REWIND.

A Marriage of Speed, Ease of Use, and Efficiency

In a fast-paced design world working with high-profile clients, tight production deadlines often require short turnaround time and the ability to rapidly prototype with ease. For the INFINITI project, the team only had the client on-site for 48 hours and needed to convey their concepts in a fast and efficient way, says Kate Ellis, head of production at REWIND. 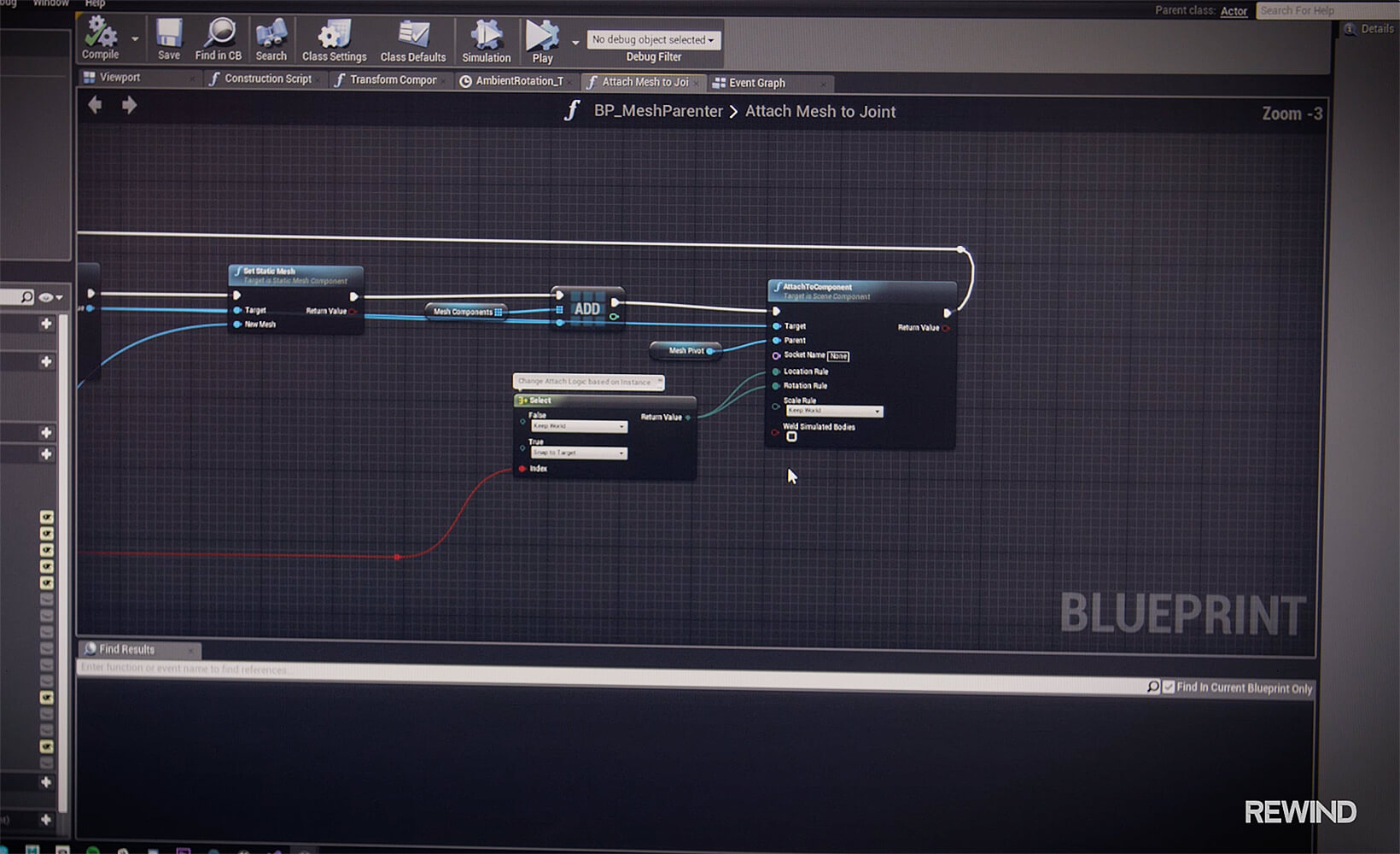 Unreal Engine’s Blueprint made the initial design and review process easier, letting REWIND sell the client on the core concept for the experience by showing them what it would look like in VR before it was fully built.
Using Unreal Engine’s Blueprint system, the team was able to mock-up a fully interactive version of what the experience might look like in VR with ease, letting the client see and understand how the car would explode and animate around them in real-time. This helped move things along and get the go ahead on taking the concept into full production.

“Unreal has become the core technology we're using for a lot of our projects,” says Solomon, “and I'm really excited to see where Unreal Studio is going.”

Watch the full video above to learn more about REWIND’s Soul of the Machine VR experience for INFINITI! Ready to give Unreal Studio a spin to bring greater speed and efficiency to your real-time workflows? Grab the free beta today!