Ever wonder how your favorite collectible gets designed and created? Blizzard lets its fans in on the process with a Q&A with Ehren Bienert (senior sculptor) and Brianne M Loftis (producer) of the Blizzard Creative Development. Learn more below.

Collectibles are one way we bring the characters from Blizzard games to real, physical life. For many of us, there’s something special about having an object from a game that you can touch and feel—you’re not just taking home your favorite character, but a piece of Blizzard art, developed in-house.

We met with Ehren Bienert (senior sculptor) and Brianne M Loftis (producer) of the Creative Development department, the team behind some of the collectibles we’ve come to enjoy over the years, to learn just how much hard work, love, and toy-fueled chaos goes into the process.

Q: What is the process to create a collectible? 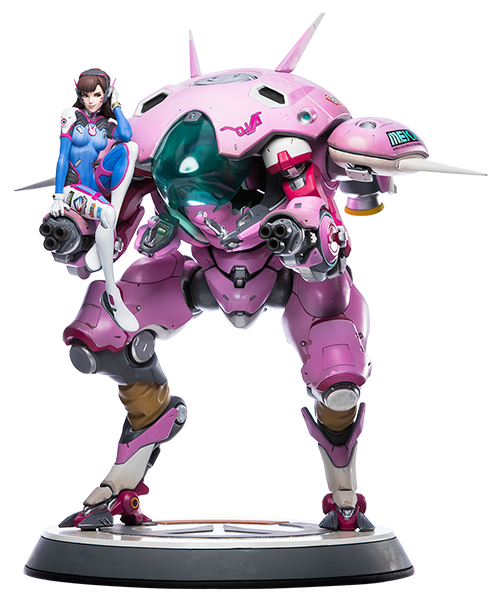 First, we work closely with the Consumer Products and game development teams to iterate on a line of characters, poses, and mediums. We have a ton of ideas and wish we could do them all, but after careful curation product managers come up with a line list of items ranging from small collectibles to full scale detailed statues.

Our artists then interpret concept art and take it from a 2D piece of artwork to digital assets, spending a lot of time in Zbrush, a digital sculpting tool that combines 3D/2.5D modeling, texturing and painting. We then revise with the game development team that produced the concept before finally moving on to create a physical prototype. We create a lot of prototypes.

We spend a significant amount of time working with the game development team on different poses to make sure we really nail the feel and personality of the character. Sometimes, dev teams have an iconic pose in mind, and sometimes we experiment until we find something that looks true to the character. Once a pose is selected, we start roughing out a 3D model of the pose. Next, we grab high-res assets from the game team and Blizzard’s animation department, and use those to model the final pose. After that, we often add a lot of detail so that the collectible can be mass-produced.

That’s when our Consumer Products team takes over and prepares the statue for manufacturing, sampling, photography, and eventually distribution through our Gear Store.

Why does adding a lot of detail to the collectible help it be mass produced?

During production, some detail is lost or softened through the process. Adding paint also affects the detail, sometimes filling in grooves or covering up light texture details. We spend the time to sharpen, even exaggerate, the detail on our prototypes to get ahead of this. 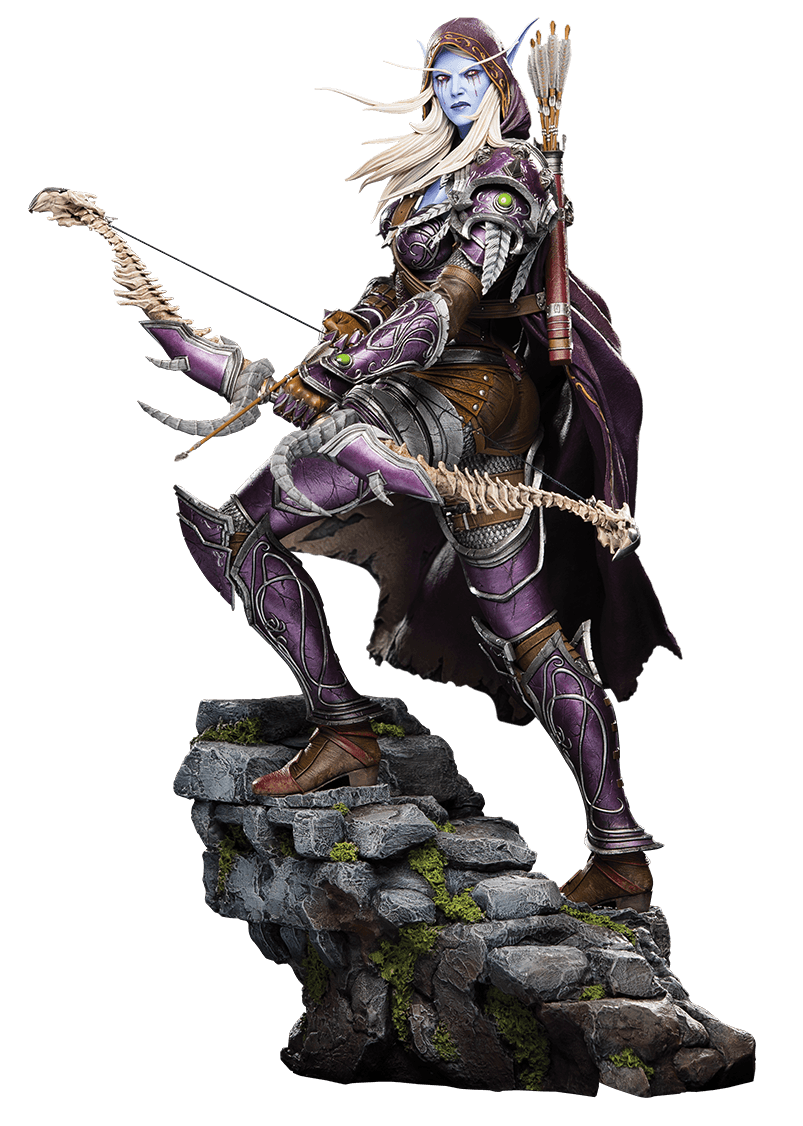 Q: What goes into picking the right pose?

Though the game dev team has the most familiarity with the character as it’s rendered in-game, we make suggestions and compromise as we go, because sculptural assets that are going to be physical products need to work as well as possible from many angles. It can be tricky interpreting a 2D concept into a 3D reality, especially when you don’t have 360-degree views. You have to figure out how to make the character readable and identifiable from all available angles, even if you can’t see the other side of the concept art. Sometimes arms and legs aren’t visible in a concept—that can be a big challenge. Sometimes, we have to move around arms or legs to make them look good—there’s a lot of back and forth to get this right.

Q: Can you describe the specific parts of the process? What’s the progression? 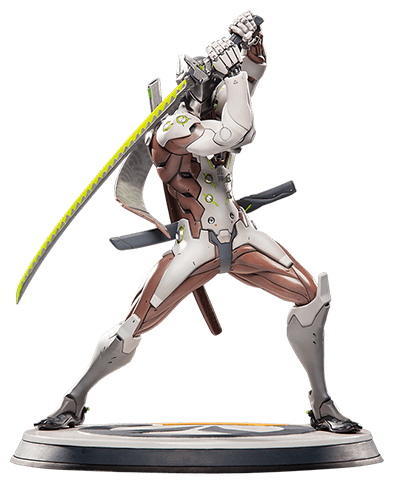 A: We go from: concept-roughout-detailing-final sculpt-molding-casting-painting-photography. From there, two copies are sent to the factory: one called a “tooling,” which the master molds are made from, and another called a “paint master,” which is used as a guide for painting. Then the factory takes the parts we send them and begins to assemble a sample of the final product. The first versions that come to us are unpainted "test shots," which we use to make sure everything looks as close to our final sculpt as possible. We go over everything with a fine-tooth comb. There can be multiple rounds of reviewing test shots until we finally approve one for the next step, which is painting. The paint process is similar. After everything looks good, in-house designers create packaging and our manufacturing teams do tests to ensure the statues make the haul from the factory to the Blizzard Gear store customers intact!

Q: How do you shepherd along the manufacturing process?

Product management and manufacturing teams will often travel to production facilities to facilitate the process and give feedback to the minute details, for example the grip tightness between a sculpt and how their weapon holds as well as accuracies in paint and color. They review the entire pipeline across the board and work with the factory advisor to maintain the quality standards.

Our ultimate goal is to provide the factory with the absolute best prototype for them to work with—it’s the target the factory needs to hit. It’s never possible to reproduce a prototype 100 percent, but the factories do phenomenal work. Their job is to hit a moving target.

Q. What is the sort of moving target that factories are trying to hit?

The factory needs to keep track of everything along the way to make sure errors don’t work their way into the pipeline. These can be caused by hand-molding, casting, painting, anything. For instance, if somebody pegs a statue and it’s leaning too far forward and it’s been painted and accessories have been glued in place, the whole thing needs to be tossed, which is a waste of time and money. Thousands of units can be affected if it’s not caught early on.

Q: Why do you make so many prototypes?

We make a rough prototype to see the general pose and proportions. Once we like what we see, we refine the rough out and take it to completion. We make molds of the final sculpture so we can make castings to send to the factory for mass production. 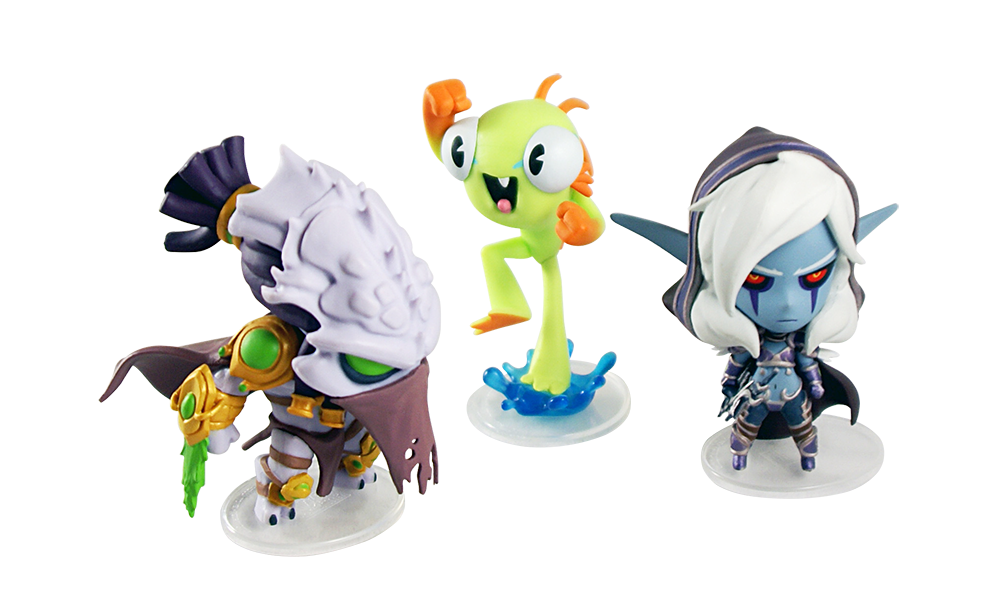 Q: What ends up happening to those prototypes?

Most of them end up being destroyed during the manufacturing process. The resin castings are made into molds at the factory which creates the statues. The paint masters hold up a little bit better—we donated one to the BlizzCon Charity Auction. 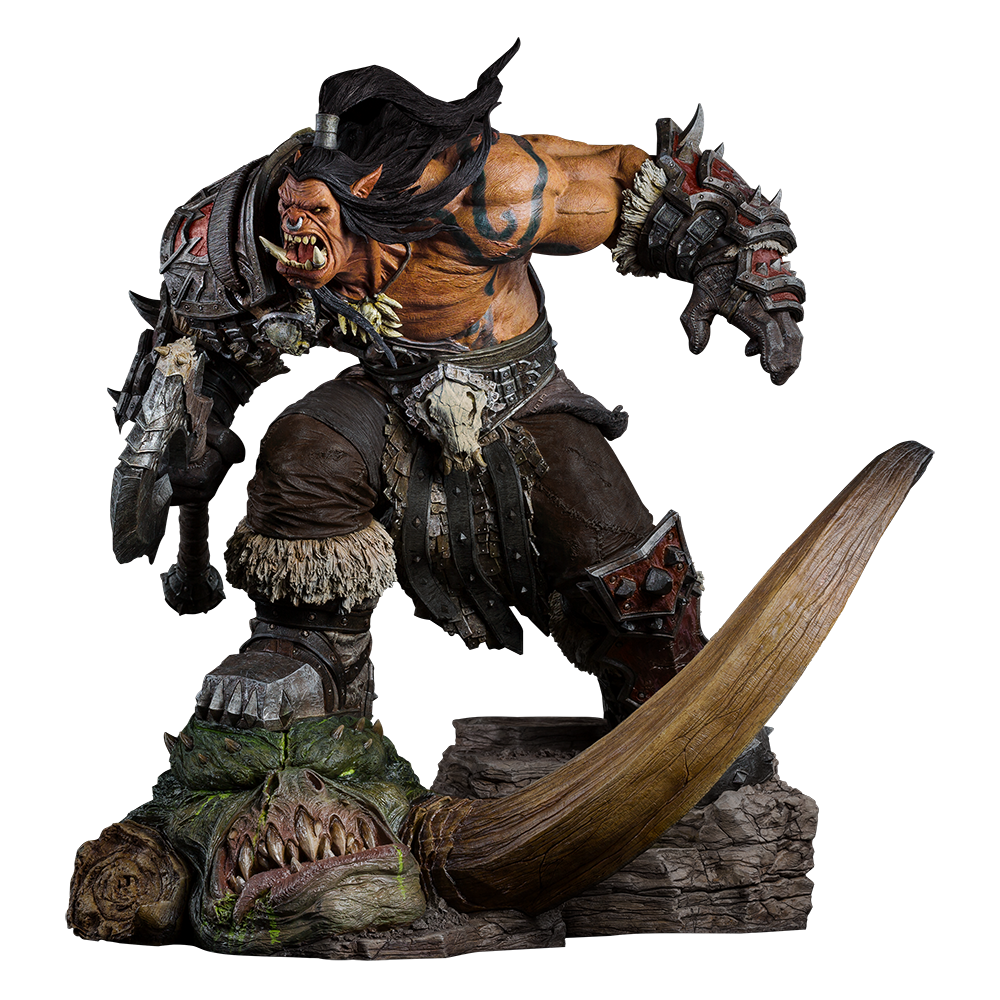 Q: What's the most challenging aspect of your job?

Timelines are stressful. Producing a finished collectible takes about 12 to 18 months from beginning to end, and we’re working constantly with product management, manufacturing, QA, and logistics teams to maintain the quality of the product throughout that. But the payoff is worth it—knowing you created something that is revered by thousands of people. It’s nice when people comment on the detail that you spent months painstakingly putting into each project.

Q: Can you tell us about your workshop?

It has a paint booth with ventilation, and we have a whole room set up to do rapid prototyping and 3D printing. We do almost all of our own molding and casting in silicon and resin.

Q: Do you have any advice for aspiring artists or sculptors?

Do your own artwork at home to keep the fire burning.

Q: Who can we credit for creating these statues?

It’s a huge team effort. Creative Development, Consumer Products, the Game Development teams all work together. There's so many aspects to this one product. All of Blizzard did it. "Blood was shed,” as they say. 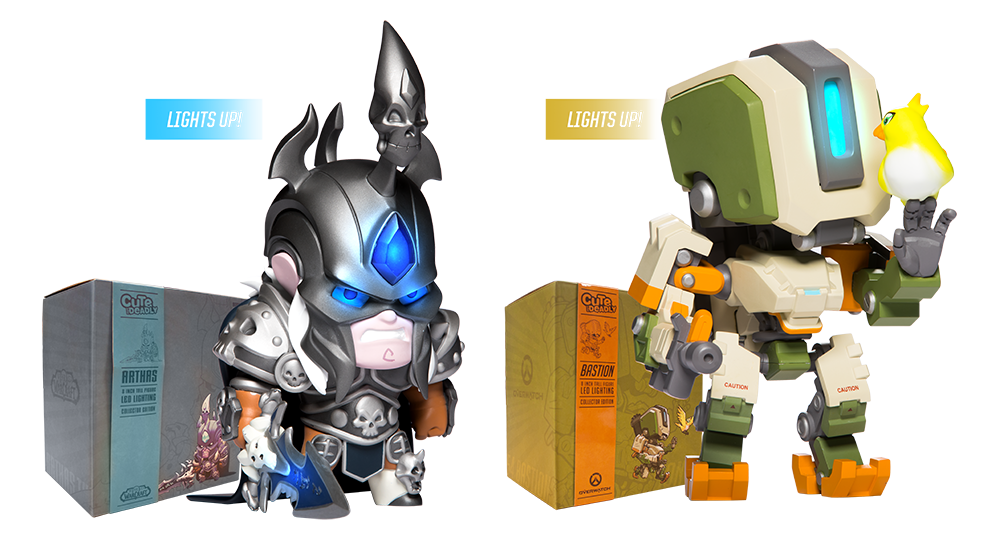 Q: What do you want people to take away from seeing a collectible you’ve created?

Inspiration. If looking at a collectible gets you excited to play the game, or makes you want to do your own artwork, we’ve done our job. The physical connection is really cool, too—this is one way you can essentially own a part of Blizzard.

The Orc Statue
Statues of Blizzard 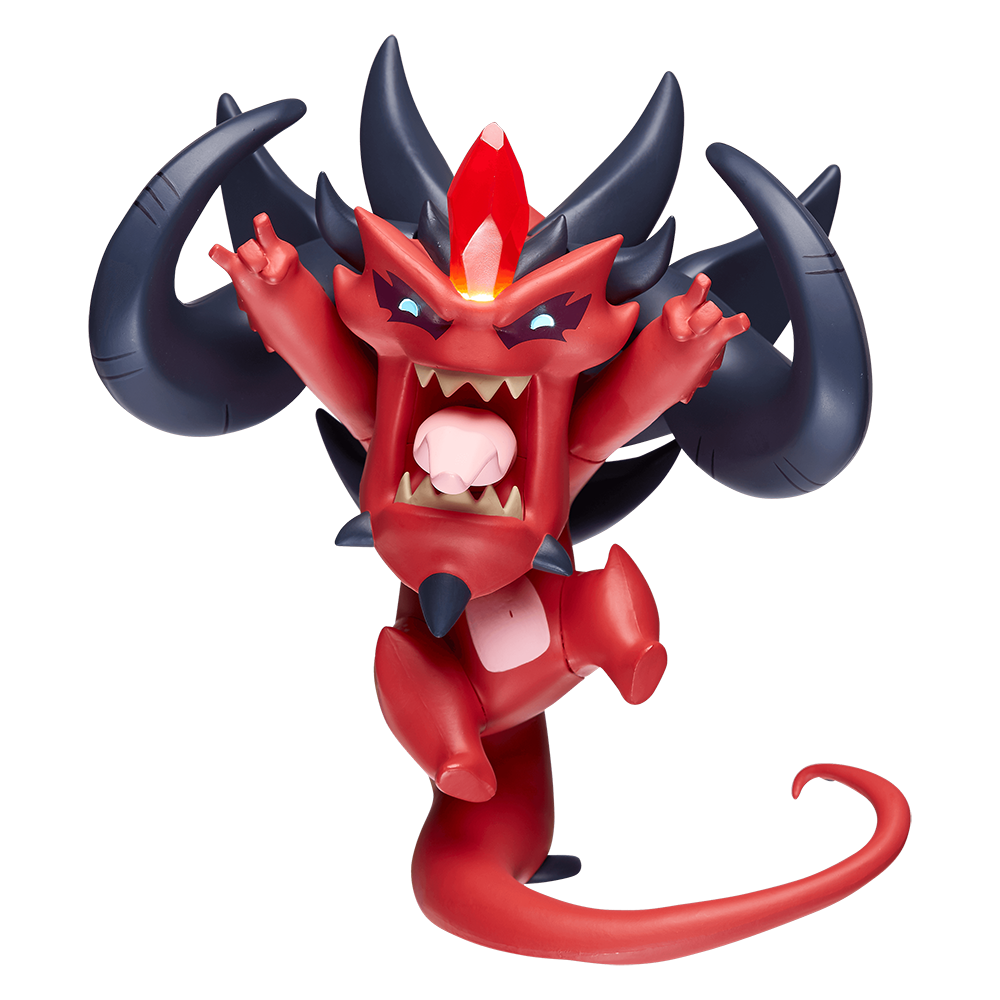