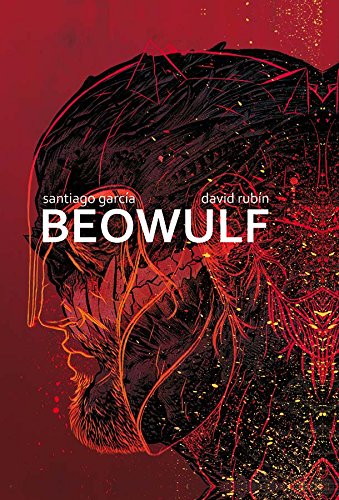 Publisher's Introduction:
SANTIAGO GARCÃA and DAVID RUBÃN unite to bring forward the myth of Beowulf, which has endured for a thousand years and inspired an epic poem of the same name, became a foundational piece of English literature, and inspired generations of authors, from Tolkien to a good number of Hollywood screenwriters. BEOWULF tells of the tale of a Scandinavian hero in lands that would become what is now Denmark and Sweden: A monster, Grendel, has arrived in the kingdom of the Danes, devouring its men and women for 12 years until Beowulf arrives to save them. GARCÃA and RUBÃN faithfully follow the original story for a new version that is neither revisionist nor postmodern, but captures the tone and important details of the poem, translating its potent, epic resonance and melancholy into a contemporary comic that isn't standard swords and sorcery or heroic fantasy fare, but rather an ancient story with a modern perspective that remains respectful of the source material.

The original story (the oldest surviving English poem) is simple and filled with melancholy. Readers weaned on Game of Thrones fantasy won't find complex political intrigue or ambiguous characters. This Beowulf captures the poetry and horror of the original in part by reducing the text and emphasizing the stark and bloody imagery from the original poem.

Beowulf is a project that was long in the making. Originally a childhood dream of artist Santiago, it took David Rubin to adapt the poem into a text that captured the spirit and feel of the original. Here's a quote fro Santiago's blog on Beowulf:

There are so many comics inspired by Beowulf that with them you could almost write a story of the medium, because each one says more of the era in which it was conceived than the poem itself on which they are based.

Santiago gets exactly to the point about the challenge facing artists adapting such an ancient classic. That he and his partner take such pains to understand the original Beowulf poem so as to effectively translate it to a visual medium speaks volumes about just how great their version is. You can read a good deal about this process in Santiago's blog entries on Beowulf.

While the text of this version of Beowulf is effective, it is the artwork that dominates the story. Perhaps this connects to Santiago's assertion that any Beowulf adaptation reflects the interests of the age in which it was written. Ours is a visual era due to the dominance of film and tv. But what is so exceptional about Santiago's work is that his style does not copy from film/tv, but instead creatively expands on it in order to present an original way to visually tell the story of Beowulf.

Beowulf is a graphic novel that rewards re-reading and it wasn't until the second time I read it that I began to understand that there are many subtle touches (small boxes of visual imagery, etc.) that enhance the story and mood. One also moves away from reading it like an heroic story and instead one of tragedy and death. In that sense, Santiago and Rubin's adaptation of Beowulf is intensely modern because the various (and many) deaths in the story have meaning on their own. You even feel for the deaths of Grendel and his mother.

Image comics should get a medal for issuing this remarkable graphic novel in english. Anyone interested in stylish and poetic graphic storytelling along with intense evocation of an essential world myth/story should rush to buy this book. My brief description and comments on Beowulf are inadequate for this brilliant graphic novel.

You can find out more about Beowulf at Image comics and at all good comics bookstore. I'd also recommend checking out Santiago's excellent blog for examples of his work and ideas.

And if you find that you enjoy this adaptation consider reading the original. The Seamus Heaney version is a good place to start, but I prefer Tolkien's recently published version myself.