Review of Red Giant's Universe 2.0: The Best Set of Video Effects You Can Buy Review of Red Giant's Universe 2.0: The Best Set of Video Effects You Can Buy

Can you believe that Red Giant's Universe collection of video effects and transitions is only 2 years old? After several months of public beta testing, Universe 1.0 released in April of 2014 to very positive feedback. Now, video editors have the great pleasure of working with Universe 2.0, a significant upgrade that will delight users around the world.

What exactly is Red Giant's Universe 2.0? It's a collection of approximately 62 video effects and transitions created as a cross-platform library (Mac/Windows), Universe 2.0 works with an amazing variety of video editors including Premiere Pro, Final Cut Pro, Da Vinci Resolve, HitFilm, Sony Vegas and more. You can check this Red Giant link for a complete list of effects and transitions; and this link will take you to the User 2.0 FAQ

IÃ¢â‚¬â„¢ve been working with the library of effects in Universe 2.0 for the last several months in my video editing projects for Renderosity and, frankly, I donÃ¢â‚¬â„¢t know how I live without them now. But letÃ¢â‚¬â„¢s look at what new additions and changes have been made to the effects/transitions library in Universe 2.0

With a focus on Motion Graphics, some of the new tools and updates include:

Along with the new user experience, 18 Red Giant Universe tools have been updated with additional new features, including:

This FAQ has more info about all of the updates and new features.

USING UNIVERSE 2.0
The effects/transitions library installs right into your video editing software of choice (in my case, Premiere Pro CC) when you set up the Universe Link application and choose the subscription model you want (Yearly, Monthly and Free). Once installed, you simply go to your effects window and choose either a video transition or a video effect. The application is GPU-based, so as long as you have a reasonably good GPU (and good ones are pretty cheap now) your interaction with a particular effect or transition is nearly instantaneous. This is a very good thing since any slow-down in your editing workflow takes away time and focus. Kudos to Red Giant for getting this technology right and making it easy for artists to do their work. And note that all Universe 2.0 effects are Ã¢â‚¬Å“GPU acceleratedÃ¢â‚¬Â meaning that they are FAST and will not slow you down.

I am particularly impressed with the new Preset Browser as it makes deciding on the right effect so much easier. The old way had you applying the effect and then checking the video on the time line to see how it looks. Now, I can see how the effect will look without having to take that extra step. I also am in love with the new Logo Motion in Universe 2.0. It is tedious to craft ever single title or image credit in my weekly Gallery of the Week videos. Now, all I have to do is create the title, place it over the clip I want it to appear in front of and then apply the Logo Motion effect. From inside of the effects tab in Premiere, I can now choose exactly how I want the title to move/appear. Saves me literally hours of work. 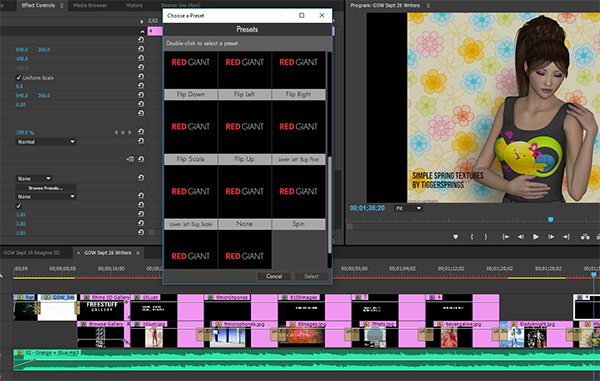 CONCLUSION
Red Giant has outdone themselves with Universe 2.0. The variety of improvements to existing effects/transitions, the ease of use and outstanding new additions to the effects library make this application a must-have for any serious video editor. I was amazed at how easy it was to use the new effects (especially the new HUD and Motion Graphics effect) and delighted with the very careful way Red Giant designed them to be tweaked. Most editors donÃ¢â‚¬â„¢t use an effect right out of the box, but tend to want to adjust and tweak it to fit their scene/project. Red Giant has made Universe 2.0 effects super easy to use and thatÃ¢â‚¬â„¢s a big selling point for pros and beginners alike.

Top marks for Universe 2.0. You really must try the 14-day fully functional trial version out and see what IÃ¢â‚¬â„¢m so excited about. And be sure to read the very useful Universe 2.0 FAQ to get all of the info you need on this excellent product.

Pricing and Support
Red Giant Universe 2.0 is priced at $99 per year or $20 per month. The Universe 2.0 web page has all of the tutorials, support forums and info you need to bring the look of your videos to the next level.

NEW TO UNIVERSE?
If you arenÃ¢â‚¬â„¢t already a Universe customer, you can purchase a subscription or download a free trial at http://redgiant.com/universe.

IMPORTANT: OTHER CHANGES FOR EXISTING USERS
With this update, there have been some other changes to Universe with regard to legacy tools and projects. Based on feedback, we have removed the least popular plugins from Universe 2.0 and will no longer offer free tools. Rest assured, if you were already using Universe before today, you will still have access to those older tools, and older project files using these tools will still open properly. Read THIS FAQ to learn more.

Note: some informational parts of this review are reprinted from Aharon RabinowitzÃ¢â‚¬â„¢s news release at Red Giant. My thanks to Red Giant for providing access to Universe 2.0 for review. What a great company!