All Greek to Me: GPUs Power Groundbreaking VR Experience If you've ever dabbled in Latin poetry, you may have stumbled upon Ovid's Metamorphoses. Its tales of transformation and reality have fascinated artists for centuries.

In a similar theme, a new artwork, La Dispersion du Fils, tells the story of Actaeon -- a hunter who's turned into a stag by the goddess Diana and devoured by his own hounds.

Just as Ovid's original work blurs the lines of reality, this new piece immerses viewers in the metamorphosis thanks to a 360-degree omnistereoscopic VR system and living 3D "tapestries" of moving images, constructed entirely in real time.

A New Form of Immersive Experience

The impressive artwork demands an impressive display system. The Advanced Visualisation and Interaction Environment (AVIE), developed at the iCinema Centre of the University of New South Wales, provides just that. 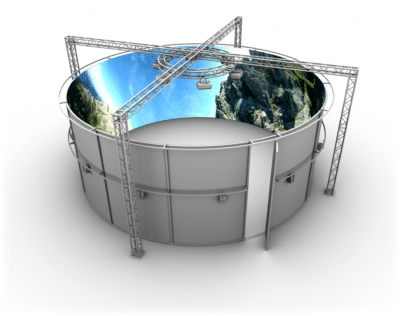 AVIE is constructed of a cylindrical screen 10x 4 meters, with 12 projectors and a 13-channel surround sound system, and can immerse an audience of up to 30 people in a single shared virtual environment.

Generating real-time visuals for such a large display is computationally demanding. In the past, to render 10K x 1K stereo panoramic imagery at 60 frames per second required a cluster of seven computers. However "clustering" can pose significant problems.

"Hardly any modern 3D development environments natively support clustering," said Matthew McGinity, assistant professor at the University of WÃ¼rzburg. "A cluster is effectively a computer that supports very little off-the-shelf software and this tends to dramatically increase the time and cost of project development. Furthermore, clusters increase the risk of hardware failure and downtime -- a vital factor for public exhibitions in museums or galleries."

"The increased power of the Pascal generation Quadro graphics cards means that we can easily render the La Dispersion du Fils across all 12 projectors at a consistent 60 frames per second, on just one workstation," says McGinity.

Older applications developed specifically to run on a cluster can be run on the AVIE system simply by running a "virtual cluster" -- multiple instances of the same application. "More importantly," adds McGinity, "we can now develop new applications and artworks using all the capabilities of state-of-the-art 3D engines, without the added complexity and restrictions of clustering."

The post All Greek to Me: GPUs Power Groundbreaking VR Experience appeared first on The Official NVIDIA Blog.