Although the rise of VR is making it seem like it's a new canvas for artists, virtual worlds like Second Life have been attracting photographers, filmmakers, digital artists and musicians since it first opened in June of 2003. Photography, in particular, has become a fascinating art form in Second Life.

Melusina Parkin (her SL name) has been an active virtual photographer since 2008. I came across her work on Facebook and was entranced. The spare, minimal photos reminded me of Andrew Wyeth paintings. And I found her choice of virtual world locations to be fascinating. After spending time on her Flickr page where many of her photo sets are archived, I was very interested in talking to her about her ideas and work habits.

I've created a short video of selected photos from Melusina Parkin which you can view above. She was kind enough to answer my questions over the course of a week. This interview has been divided into two parts, of which this is Part 1. The text is only slighted edited for clarity.

Renderosity Magazine: can you tell me a bit about yourself? How did you become a digital photographer and what led you to do photography in the virtual world of Second Life?

Melusina: Well, I started photographing when I was very young, using an old Rolleicord mod.1936, 6x6, Zeiss lenses, all manual of course. For a long while, analog photography has been my hobby, although I was too lazy to study: results were never so good... Years later, when my work didn't leave me time enough, I had to stop. Meanwhile I've been educated in Art and History, so my passion for images grew up a lot...

When I discovered Second Life, in 2008, I got fascinated by the opportunity to see so many worlds. I was especially caught by the way people reproduced their own worlds and way of life. I started working as fashion manager at a store managed by an italian creator, MariaElena Barbosa (MEB), taking care of marketing. So I had to learn to photograph for making ads and vendors. I was very happy to see that I could start again with my passion without spending too much time going around. It looks me like a wonder I was able to visit different countries in a few hours of the night.

But I never liked flat and trivial postcard-landscapes. My passion was for clean and simple images, being a follower of minimalist painters and photographers. Then, I specialized in conceptual minimalist photography, taking care to follow the rules of great photographer of the past (oh, i forgot to say I'm a vintage lover and I had for a while also an Art Deco furniture brand, Melu Deco, that I'm going to re-open in the next days in a region called Time Portal). One of these rules was never shooting thinking of a unique masterpiece, but making series, where differences and coherence contributed to enhance the theme (the Italian photographer Luigi Ghirri (1970-80s) was a master in that and in other features of my style).I think that this is almost all about me and my work as a SL photographer. 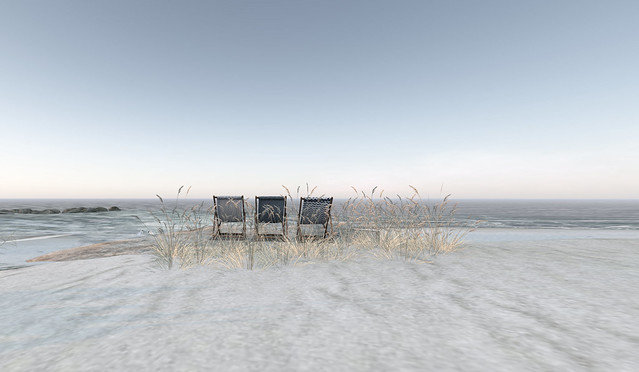 you mention that you chose "minimalist photography" as a specialty, why is that? What is it about spare imagery that appeals to you so?

Minimalism is a feature of most 20th century aestethic culture: from the "less is more" by Mies Van De Rohe (and Bauhaus) in architecture to the paintings by Lucio Fontana made by simple cuts on a blank canvas, the idea of representing outer and inner world by simple lines, few elements and so is widespread over all the modern and contemporary art, design, music, literature, .Photography (and movies) has been a leading field in that. I could quote the lone-liness described by the stunning images of the Antonioni's films, or the great photog-raphy shot by Michael Kenna. Minimalist images can be an insulated object or an empty scene or even a lonely landscape. They can be also a detail of an object (or of a body). In all these cases, a minimal look enhances hidden simple shapes in our daily life.

I noticed that you have such a great ability to compose a shot. Is this be-cause of your study of other photographers you admire or is it just a talent you have to see things poetically?

Composition... Yes, I think that the way you catch a scene is a crucial point in giv-ing a meaning to it. Of course, as it's for light and colors, I learn a lot about composition rules (and their breach) watching and studying other's photographs. Great mas-ters give us precious suggestions and advices both by their writings and their actual work.

I don't know - and I'm not the person who can say it - if I have a special "poetic" talent. However I know that sometimes a subject, a special light, a shape has a so compelling strenght that I can't refrain to shoot it. Maybe it stimulates old memories of which I'm unaware, or it "says" something I can't express in other way. 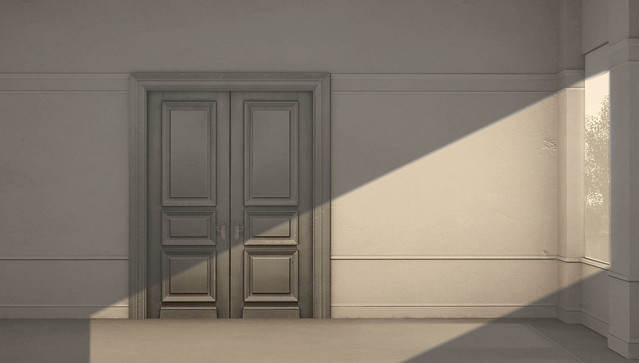 Moreover, I've to say that sometimes I "build" my subjects consciously, deleting some elements (in SL it's easy!) or making photomontages, or just choosing a point of view and a perspective. Post-production in Photoshop can help a lot in this, and I've a lot of fun when I can express something that's urging me from inside by manipulating an image (although I don't like neither use distorsions or too much saturated colors or so...).

Basically, my work on a virtual world image consists in fixing the perspective, in desaturating the too bright colors and sometimes in applying a filter (that I make by myself) to make a shot look older or smoother or cleaner. I use to keep two folders in my archive: one of them is full of pictures I take 'cause my curiosity and the desire to keep memory of sonmething I liked; the other one is that of the "art" photographs: they won't represent or witness things, but rather they aim to express a concept, an idea, a feeling.

After all, like everyone of us, photographers "make" the world they represent. Eyes never copy reality, they build it!:))

You can find more detailed informations and a complete list of Melusina Parkin's exhibits on a blog she uses as a companion to my Flickr: http://meluphoto.blogspot.it/p/home.html